Discovered in the "History of the State of California and Biographical Record of the Sacramento Valley, California: An Historical Story of the State's Marvelous Growth from Its Earliest Settlements to the Present Time : Also Containing Biographies of Well-known Citizens of the Past and Present- 1906" 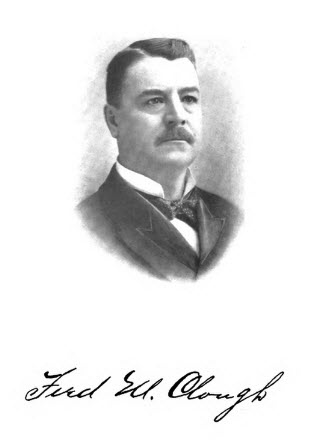 FRED MILTON CLOUGH. The Pacific coast man­ager of the Diamond Match Company’s interests at Chico assumed his present responsibility in 1902, bringing to the industrial development of this beautiful town and fertile surrounding coun­try a wealth of business sagacity and judgment which it had taken years to acquire. He had learned valuable lessons from association with a number of eastern concerns, all more or less conservative in their nature and enlightening in their reliable and straightforward methods. Mr. Clough has lived for one year more than half a century, having been born in West Mount Ver­non, Kennebec county, Me., December 3o, 1853, and with the exception of fifteen years of that time has supported himself. His father, Wil­loughby, and his grandfather, Chase, were born and lived on farms in Maine, his mother, for­merly Betsey Adams Lyford, being a native of the same northern state. F. M. Clough was the youngest son in a family comprising four sons and three daughters, and was educated in the common schools of Maine, at Eaton preparatory school and Wesleyan Seminary. His grand­father, Chase Clough, was a soldier in the war of 1812.

At the age of fifteen years F. M. Clough began to work in a grocery store in Kents Hill, Me., and in 1870 removed to Middletown, Conn., where he worked for a sewing machine concern for a couple of years. In 1872 he was engaged as machinist with the Northampton Emery Wheel & Machine Company, Leeds. Mass. Later he was employed as foreman in the Mill River Ivory But­ton Company, located at Leeds, Mass., until May, 1874, when the factory was destroyed by the Mill River flood. In 1874 he was employed by the Smith & Wesson Revolver Works, Springfield, Mass. In 1875 he was employed as tool maker by Newell Brothers of Springfield, and in 1877 began a five-years’ association with the Ameri­can Braid & Ivory Button Company of West Cheshire, Conn. For the same length of time he was superintendent of a large lumbering con­cern in Maine. In 1886 he removed to Penn­sylvania and engaged in the lumber business in Lumber City for five years, in 1891 associating himself with the Lebanon Match Company of Lebanon, Pa. He then became identified with the Diamond Match Company at St. Louis, in the capacity of traveling machine inspector, and in 1893 was stationed at Chicago as assistant in charge of the German affairs at the World’s Fair. During 1894-95  he again traveled for the Diamond Match Company, and in 1896 bought out the Pacific Match Company at Tacoma, Wash., turning over its interests to the Diamond Match Company within a year’s time. In 1896 he became manager of the lumber interests of the company at Athol, Mass., and in September, 1902, assumed his present responsibility as Pa­cific coast manager for the company’s interests, with headquarters at Chico. He is also general manager of the company’s railroad, which is thirty-two miles in length. In addition to in­terests mentioned Mr. Clough has identified him­self with various enterprises which tend to the upbuilding of the town and county, among them being the Chico Investment Company, organized by him in 1903, and of which he is treasurer. He is also president of the Stirling City Bank, incorporated in December, 1903.

Mr. Clough established a home in Springfield, Mass., marrying Annie B. Bonney, a native of Brooklyn, N. Y., and a daughter of William Bon­ney, born in Birmingham, England, and a clergy­man in the Methodist Episcopal Church. Five children have been born to Mr. and Mrs. Clough, as follows : Florence, Emily, Nellie, Frank and Irvin. An eminently social and genial nature renders Mr. Clough’s advent in Chico of addi­tional importance. He is a keen appreciator of fraternal organizations, and is a member of the Blue Lodge, F. & A. M.; Chapter, Commandery and Shrine of Islam. In politics he is a Repub­lican, and socially he is a member of the Union League Club.

See the original source material here as there are other “Clough” references therein as well. 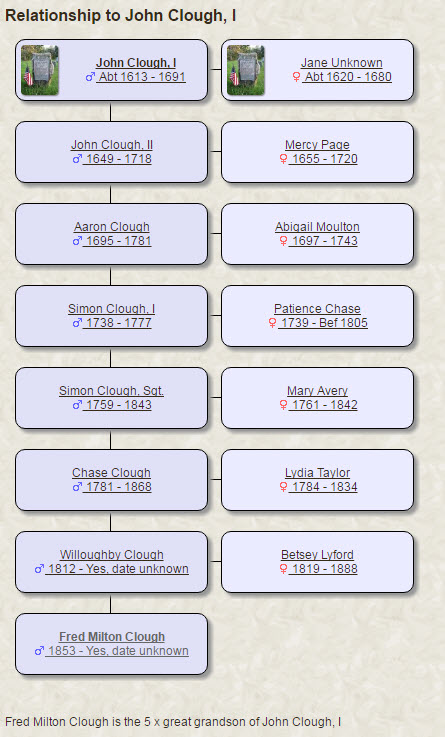