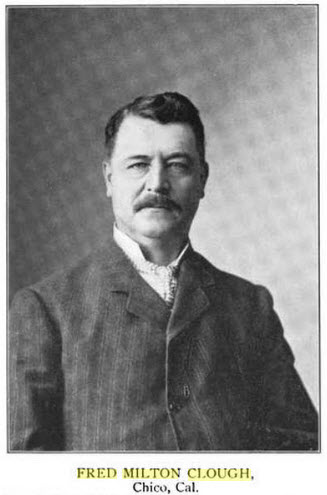 FRED MILTON CLOUGH (see original source book here) was born on December 3o, 1853, at West Mount Ver­non, Kennebec County, Maine, and is a son of Willoughby and Betsey Adams (Lyford) Clough. His father was a farmer, and represen­tatives of the family, which is of Scotch-Irish descent, came to this country four generations ago, settling near Gillmantown, New Hampshire. On his mother’s side, Mr. Clough is descended from one of the oldest American families (the Adams) and whose members have been prominent in statecraft and literature.

Mr. Clough was educated at the common schools and at the Seminary at Kents Hills, Maine. He worked on a farm until he was six­teen years of age, and then studied the machin­ist’s trade at Middletown, Connecticut, for three years, afterward becoming foreman for the Mill River Button Company, at Leeds, Massachusetts, where he remained two years. He then secured a position as tool-maker with the Smith & Wes­son Revolver Works, at Springfield, Massachu­setts, with whom he was associated for five years, later becoming superintendent of the American Braid and Ivory Button Company, of Westcheshire, Connecticut.

For the next ten years, Mr. Clough followed the lumber business in Maine and Pennsylvania with considerable success, and, in 1892, he be­came associated with the Diamond Match Coni-pany, first as a machinist, in the factory at St. Louis, Missouri, and then as head machinist, hav­ing in his charge the various plants of the cor­poration. For the last six years, up to January 1, 1903, Mr. Clough was manager of all the New England lumber business for the Diamond Match Company, and has practically had charge of the Pacific Coast Department since 1902, as it was on his recommendation that the company located in California territory.

Under Mr. Clough’s direction the Diamond Match Company is building a town of about 3,000 people. at Stirling, thirty-two miles dis­tance from Chico, Butte County, where a factory is to be erected and one of the most modern plants installed. The Butte County Railroad Company, which has been incorporated with a capital stock of $1o,000.000, and of which Mr. Clough is Manager, has for its object the building of a standard gauge line from Chico to Sterling.

Mr. Clough is Treasurer of the Chico Invest­ment Company and has a number of other busi­ness interests. He is a typical self made man, and his example is worthy of emulation by the aspiring youth of the land.

Mr. Clough is a Mason, a Knight Templar, and is a member of the Home Market Club, of Boston, and the Union League Club, of San Francisco.

In June, 1874, he was married to Annie B. Bonney at Springfield, Massachusetts, and they have five children—Florence, now Mrs. Harry Hoyt, of Lebanon, Pennsylvania; Emily, Nellie, Frank and Irving Clough.