I found the following article The Granite Monthly, a New Hampshire magazine, devoted to literature, history, and state progress, Volume 41– 1909. 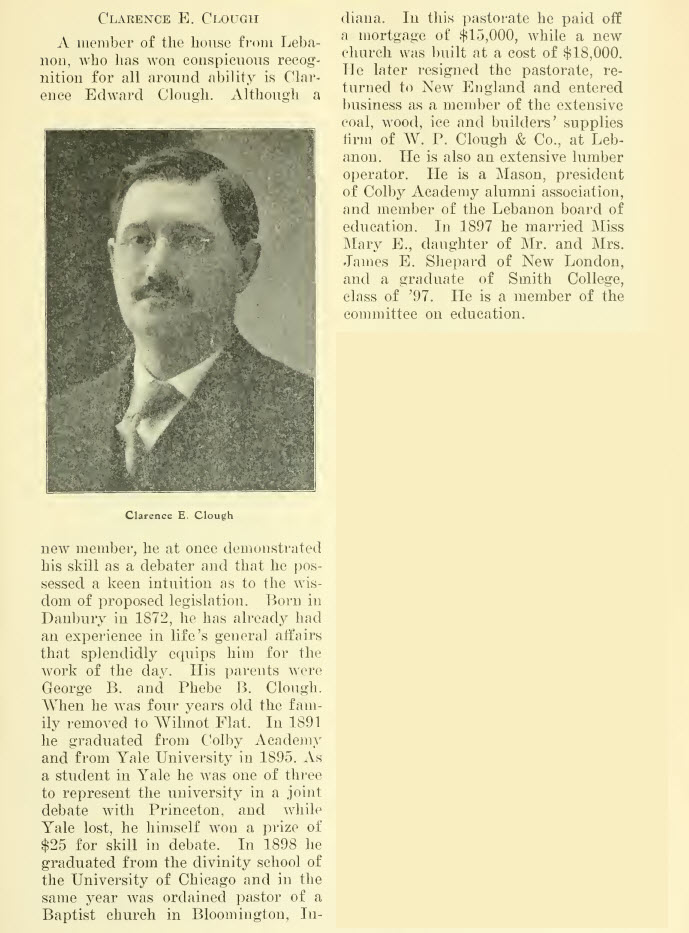 A member of the house from Leba­non, who has won conspicuous recog­nition for all around ability is Clar­ence Edward Clough. Although a new member, he at once demonstrated his skill as a debater and that he pos­sessed a keen intuition as to the wis­dom of proposed legislation. Born in Danbury in 1872, he has already had an experience in life’s general affairs that splendidly equips him for the work of the day.

His parents were George B. and Phebe B. Clough. When he was four years old the fam­ily removed to Wilmot Flat. In 1891 he graduated from Colby Academy and from Yale University in 1895. As a student in Yale he was one of three to represent the university in a joint debate with Princeton, and while Yale lost, he himself won a prize of $25 for skill in debate. In 1898 he graduated from the divinity school of the University of Chicago and in the same year was ordained pastor of a Baptist church in Bloomington, In­diana.

In this pastorate he paid off a mortgage of $15,000, while a new church was built at a cost of $18,000. He later resigned the pastorate, re­turned to New England and entered business as a member of the extensive coal, wood, ice and builders’ supplies firm of W. P. Clough & Co., at Leb­anon. He is also an extensive lumber operator.

He is a Mason, president of Colby Academy alumni association, and member of the Lebanon board of education. In 1897 he married Miss Mary E., daughter of Mr. and Mrs. James E. Shepard of New London, and a graduate of Smith College, class of ’97. He is a member of the committee on education.