The following was transcribed from "Historic Homes and Institutions and Genealogical and Personal Memoirs of Worcester County MA, Vol I, Page 445" available at archive.org 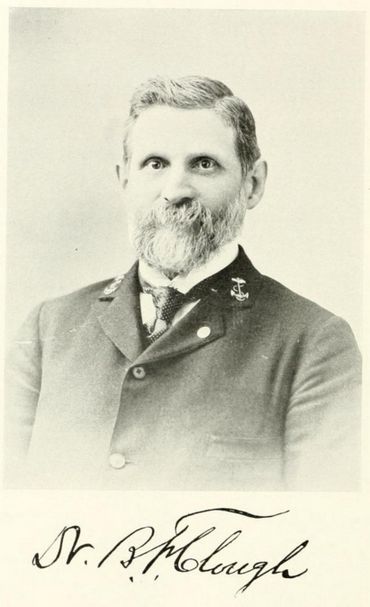 Dr. Benjamin Franklin Clough , son of Arthur Clough, was born at Kennebunkport, Maine, February 4, 1838.  He attended the common schools there and supplemented his schooling with a course at Berwick Academy, at South Berwick, Maine, where he was fitted for Harvard College.  To prepare himself for his medical studies he entered the drug store of Alexander Warren at Kennebunk, Maine, as an apprentice, November 6, 1856, and remained there until March, 1858, when he accepted a clerkship in Biddeford, Maine, where he remained until November 6, 1860.  He took a short vacation and then came to  Boston to work in the drug store at the corner of Tremont and Boylston streets, April 12, 1861.  He remained in that position until October 16, 1863, when he received an appointment as surgeon’s steward in the United States Navy.  He proceeded to Cairo, Illinois, to report to Admiral Porter on his flagship “Black Hawk,” began his new duties October 23rd and served on that ship during the Red River campaign and other engagements.  The “Black Hawk” was destroyed by fire April 22, 1865 and he was transferred to the hospital ship “Red Rover,” where he served until the close of the war.  He was mustered out August 12, 1865.

He returned to Boston and accepted a clerkship in the old drug store, corner of  Tremont and Boylston streets, remaining until the fall of 1866, when he entered Harvard Medical School.  He was graduated with the degree of M.D. in 1869, and started to practice in Worcester.  His office was at 2 Myrtle Street until September 14, 1886, when he removed to 46 Austin Street, where he practiced to the time of death, May 8, 1899.  He enjoyed a large general practice and was accounted a wise and successful physician. He ranked high in citizenship as well as in his profession.  He was an active member of Trinity Methodist Church and of the Epworth League.  He was a Republican in politics.  He was prominent in the Masonic fraternity, a life member of Montacute Lodge, being raised November 13, 1893; made a member of Eureka Royal Arch Chapter February 6, 1894; was a member of Hiram Council of Royal and Select Masters, and of Stella Chapter, Order of the Eastern Star. He was a member of Charles Devens Council, American Mechanics. He was one of the most interested members of the Grand Army of the Republic. He joined George H. Ward Post No. 10 during the first year of his residence in Worcester, and was mustered in by  Captain Amos M. Parker in May, 1869.  He was elected post surgeon to succeed Dr. Albert Wood, December 1891, and re-elected December 1892, serving up to the time of his death.  Hon. A. S. Roe calls him the “most devoted surgeon Post 10, G. A. R. ever had.” He was also president of the board of trustees of Post to, having charge of the relief work of that organization. He was an active member of Farragut Association (Naval) of Philadelphia, Pennsylvania. He was a member of the Massachusetts Medical Society; the Worcester District Medical Society and the Harvard Alumni Medical  Society.

He married August 15, 1871, Adelia Jane, born September 13, 1845, daughter of John and Catherine (Sweetzer) Perkins, of Lynnfield, MA.  Her father was a farmer and late in life was occupied largely with the settlement of estates; was twenty-one years town clerk; captain of the militia, and representative to general court.

Transcribed from Historic Homes and Institutions and Genealogical and Personal Memoirs of Worcester County MA, Vol I, Page 445

Benjamin was the 4x great-grandson of John I. 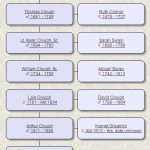