The JCGS is looking for more information on George Lafayette Clough, If you have anything you'd like to share (information, pictures, biographies, etc.) please contact the Webmaster. 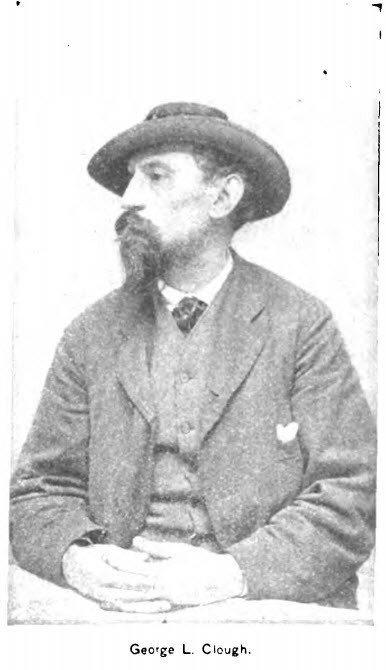 This post will mark the start of some research on George Lafayette Clough.  At this time, we are not entirely sure how he fits into the (John) Clough lineage as he does not seem to appear in the The Genealogy of the Descendants of John Clough of Salisbury, MA (Revised 2009 edition).  Some time spent researching this afternoon revealed many links to essentially the same type of information, but nothing insofar as his historical lineage.

“GEORGE L. CLOUGH was born in Auburn (NY) September 18th, 1834. His father died while George was yet an infant, leaving a widow with slender means and six dependent children. As early as ten years of age he developed a taste and tact in art, and his first picture, executed about this time, on a fragment of a board, is still preserved. From ten to eighteen years of age he was employed in compounding medicines, working by the piece for Dr. Blanchard Fosgate, and finding time to practice his favorite art. The excellence of his work arrested the attention of the artist Palmer, and the latter induced the mother to let her son go into his studio, where his chances of improvement were much increased. Here he continued until 1844, when he opened a studio of his own.  About this time Charles L. Elliott came to Auburn to paint the portrait of Governor Seward, and fortunately for Clough, selected his room for the purpose. He was much benefited by the example and kindly hints of this great master. But his patrons were few, and the young artist was severely taxed for the means of support. William C. Barber generously gave him an order for six pictures, paying him one-half in advance. These were followed by other orders, and he soon found himself able to spend a few months with Elliott in New York, there perfecting himself in portrait painting. When he reopened his room in Auburn, he met with fair success, and married a daughter of Robert Peat, in 1848. Under the patronage of the Barbers and other friends, he visited Europe in 1850, spending about a year in the principal art galleries of Germany, France and Italy. Since his return he has devoted his time mainly to landscape painting, to which his taste has always inclined him, and in which he is a close and severe imitator of nature. There are, it is said, in the city of Auburn alone, over four hundred of his paintings, indicating clearly that as a painter, George L. Clough has been highly honored and liberally patronized by those among whom he has chiefly resided.”

A picture (the only one this writer could find) was found in The Peterson Magazine, Vol VI., January, 1896, No. 1.

I found an old newspaper article about an exhibition of oil paintings at the art store of Trowbridge and Jennings that was printed in The Auburn Bulletin, Saturday, February 8, 1896.  The PDF of that old newspaper is available at the Fulton History website (a treasure-trove of information).  Go check it out.

Another post from The Auburn Weekly Bulletin, February 26, 1901, had a small passing reference to his death. He was buried in the Fort Hill Cemetery, Auburn, NY.  There is a short bio and a photo of his gravestone here.

There is another nice write-up on George available the jsuttongallery.com website. They note his obituary.

Finally, there is a picture of one of his works at the brockandco.com website entitled “A Summer Afternoon.”