From Officers and Members: Report of Proceedings of the Annual Meeting, Volume 6, 1903. 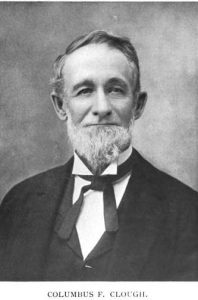 Ed Note:  I stumbled across Columbus F. on The Strangest Names in American Political History blog.  He was mentioned near the bottom.  Note, however, that the picture, as far as I can tell, was originally located in “Officers and Members: Report of Proceedings of the Annual Meeting, Volume 6, 1903”, page 78, along with the memorial sketch below.

Very early in the history of our country, there settled in Guilford, New Hampshire, one branch of the Clough family, and intermarried with the Chase family.

As near as we can ascertain they were of English origin. Simon Clough, after serving through the Revolutionary war, removed to Barnston, Canada, where he remained the residue of his life. His brother Joseph located at Three Rivers, and his brother Aaron was born in Seabroke, New Hampshire, January 21st, 1763. He married Elizabeth Clark, October, 17th, 1781, and came to Stowe, Vermont and he there settled as a tiller of the soil. He died aged about eighty years. There were born to them ten children. The sev­enth child Thaddeus was born October, 9th, 18o1 and married Mrs. Clarissa Morse Goodrich of Waterbury, and after a few years’ residence in Stowe, made a final and permanent settlement in Waterbury, where he was a successful farmer, and gained the confidence of his townsmen, who honored him with the offices within their gift. He died November 28th, 1883, at the advanced age of eighty-two years. His wife died September 3oth, 1876, aged eighty-four years. Their four children were Storrs, Angenette, Columbus and Ormael. Columbus was born in Stowe, June 28th, 1833, and spent his time like other farmer boys in hard labor and attending the common school of his district. He was an unusually bright, witty and active boy, always standing at the head of his classes and showing a remarkable power of ap­plication and perseverance which was a marked quality in his later years. Later he attended the Academies of Morrisville and Bakersfield, and so earnestly did he apply himself to his studies that he had fitted himself for college at the early age of seventeen years. At this time he was quite undecided whether to take a college course, or to take up the study of medicine. It was the wish of his father that he should study law, consequently after some hesitation, and by the advice of Hon. Paul Dillingham, he gave up his inten­tion of taking a college course and commenced to read law. Here again he exhibited the same sound judgment that was a marked feature in his early boyhood, and that was in select­ing as his tutor one of the ablest lawyers that the State of Vermont has ever produced, the late Hon. Paul Dillingham. During the time he was reading law he also manifested that same desire that he had so earnestly shown when attending school, and that desire was to understand, to get at the foun­dation and to be able to know and give a reason why he knew that it was so, and so diligently did he apply himself to his studies in all the different branches of law, that he had fitted himself for admission to the Bar before he had reached the prescribed age, consequently he had to wait about a year.

During the four and a half years which he spent under the tutelage of Gov. Dillingham, he was required to assist in the trial of his cases in the Justice Courts and did his entire work of that kind the last year.

Mr. Clough was admitted to the Bar of Vermont, March 11th, 1856. About this time he had offers of unusually fine business connections in the West, but he was encumbered with business matters which prevented him from accepting the offers. In the meantime he opened an office in a part of his father’s house at Waterbury Centre. Here he re­mained, doing a successful business for five or six years, but being a man of push he was not contented with merely doing well or waiting for something to turn up, he believed that success is gained only by hard labor and by self-denial. “Waiting for something to turn up” is waiting for moon­beams to turn into silver. Consequently he began to look for a change, and decided to try his luck in Waitsfield, where he removed June 26th, 1861. The following month July 29th he was united in marriage with Persis L., daughter of Charles S. and Nancy Allen of Waterbury, who sur­vives him. Soon after he formed the partnership with the Hon. Hiram Carleton, now Judge of the Probate Court for the District of Washington. They built up an extensive practice in Washington, Windsor, Orange, Chittenden and Lamoille Counties. During his stay in Waitsfield he formed many ties of friendship that were exceedingly pleasant, especially so were those formed with his partner in business. He returned to Waterbury, October 17th, 1867. In this year or soon after, he entered into partnership with Hon. Edwin F. Palmer of Waterbury, which continued for a short time when the partnership was dissolved and Mr. Clough was alone in business until January, 1899, when he associated himself with L. C. Moody of Stowe and G. H. Dale of Waterbury, which continued until the time of his death, which occurred on July 27th, 1899. In the sudden and unexpected death of Mr. Clough, the town of Waterbury loses one of its highly respected and prominent citizens and the Washington County Bar one of its old and valued members. It cast a shadow over the whole community, for, once% friend he was always a friend, and Mr. Clough had many that will mourn his loss. Those of us who were accustomed to meet him day by day will ten­derly remember his genial face and kindly greeting. The first quality of his character or rather that which forms the basis of it was his persevering energy. Tracing his early youth we see it predominant over all other qualities, and as he advanced in life we see the same force of purpose turned to higher objects, he realized that if a man would win a place in the ranks of professional life, he must push for it. Push is the passport to success. In no profession or pursuit is eminence achieved, apart from hard persistent work. An­other quality which seems to have given tone to his character, was his social or benevolent feelings. He was always ready to give of his time and means to all educational, charitable and religious institutions. He had a ready sympathy and words of kindness for all who were in distress. In his pro­fessional life his personal following was not always with the man of means but included the poor as well, many there are who could testify of his carrying their cases through the Courts well knowing that if they were lost he would get no pay for his services but that made no difference with him, his thought was to do the best he could for his client and talk about his fee later. He certainly was a true friend to them, and in his counsel and wisdom they reposed the utmost confidence. The whole community today mourns his loss, and he will long be remembered as a loyal citizen always faithful to all its interests. Waterbury honored the memory of Mr. Clough in most impressive obsequies on the 3oth day of July, 1899. Here among his friends and neighbors under the blue canopy of heaven, his remains were tenderly con­signed to rest in the village cemetery, and now as we bid our friend and brother a final good bye, let us cherish the good that was left in his life, remembering that “None of us liveth to himself”, others are affected by that life or “dieth to him­self”, others are interested in that death. What we do is transacted on a stage of which all the Universe are specta­tors. Our own lives are influencing and acting on the lives of others. Whether these influences are doing good or the reverse, they are influences fraught with power. How blest must be the recollection of those who like the setting sun have left a trail of light behind them, by which others may see the way to that rest, which remaineth with the people of God.

Columbus F Clough was a 4x great-grandson of John I. 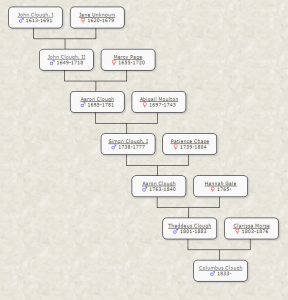